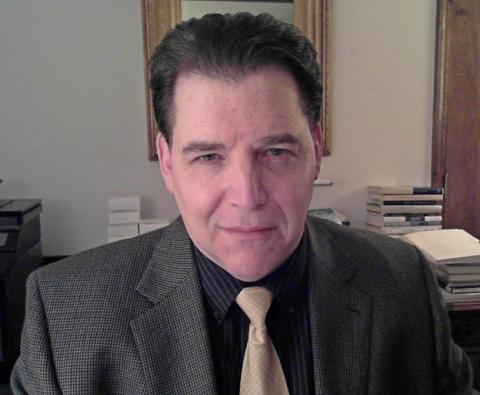 Professor Carroll was born in Chattanooga, Tennessee, and grew up in the Cajun country of southwest Louisiana. After completing graduate studies in legal history at The University of Houston under the direction of Cullen Professor of History and Law Robert C. Palmer, he began his stint in the MU Department of History in August 1998. He retired from full-time teaching in September 2019.

Professor Carroll has been teaching the Survey of American History to 1865 since 1990 and, since 1998, undergraduate and graduate courses in the history of American law, American cultural and intellectual history, and the histories of the United States Old and New Souths. His research and related teaching explore the borderlands of the United States 1803-1861, especially the interaction of legal regimes, societies, and cultures in the Trans-Mississippi Southwest in that period.

Professor Carroll is working on a book project, under contract with Louisiana State University Press, entitled “Unfreedom’s Progress: Market Revolution and the Legalities of Slavery and Racial Exclusion in Americanizing St. Louis, 1803-1861.” Unfreedom’s Progress examines a largely unexamined aspect of African-American engagement with the enticements of market revolution in antebellum America. It does so by looking at slaves and free blacks in the period 1803-1861 who resided in the rapidly-growing city of St. Louis and boldly seized distinctive opportunities offered by its thriving market economy, especially after the War of 1812. In doing so, it examines French Creole and Anglophone slaves who courageously labored and sometimes resorted to legal instrumentalities to liberate themselves – and those who faced different trials and tribulations in criminal courts for helping themselves with “takings” and personal violence. Equally important, it investigates a heretofore largely-ignored facet of racial policing and criminal adjudication in the antebellum urban West and urban South: the conflict between transgressive African Americans engaged in illicit enterprises and an ambitious evangelical middle-class who sought, in the name of progress, to advance market capitalism but impose at least some limits on its ever-widening moral and social effects.

The fortunes of African Americans who employed legal and unlawful means to survive, obtain freedom, and provide prosperity for themselves and their families changed in step with a fundamental transformation of St. Louis in the period 1832-1837. In these tumultuous years, the once-relatively-serene French fur-trading outpost changed from a place where authorities primarily identified gens de couleur libre by their free status, rather than by their race, to one where Anglophone white determination to bolster slavery placed a premium on the binary distinction between white and black. Rising trepidation over abolitionism and the increasing public transgressiveness of slaves and free persons of color spurred the construction of a full-fledged antebellum slave regime suited to the authoritarian needs of what would soon be the third most populous city of the urban South. Black struggle in St. Louis, thus, required the navigation of an ever-changing kaleidoscope of legalities. The new dispensation combined “benevolent” reform and law to exclude threatening free persons of color from both the city and state. The mature slave regime featured positive laws, policing, and criminal adjudication far better calculated than its predecessors to penalize brutally black-on-white violence and clandestine slave takings; suppress transgressive black conviviality; and at least regulate the wicked commerce of enterprising free blacks – especially bawdy houses operated by free women of color.

Dwarfed by the massive immigration of Europeans in the last two decades of the antebellum period, St. Louis African Americans contended with a mushrooming white majority determined to advance the cause of “free labor” and a white man’s country. In ways public and hidden, this black minority struggled within a regime of law that approved full freedom only for white people and deployed its power only to target African Americans whom authorities deemed to be the very worst transgressors. Black women and men, such as Harriet Robinson and Dred Scott, appealed adverse decisions in freedom suits made far more difficult by an abrupt change in Missouri Supreme Court freedom policy. Others pressed legal claims to property wrongfully seized by whites and citizenship rights against free Negro exclusion within the courts. By early 1861, St. Louis free blacks had clearly demonstrated their capacity to succeed in the competitive world of market capitalism with both reputable and, less commonly, illicit enterprises – the profits from which, however, they usually devoted to the liberation of themselves and loved ones.

With the benefit of a UM System Research Board grant for research leave in FS 2018, Professor Carroll is also continuing work on the research and writing of a book manuscript tentatively entitled “Babylon’s Unbound: Religion, Gender Legalities, and the Rise of White Man’s Democracy in Americanizing St. Louis, 1804-1837.”

This book engages the challenge that historians have faced for several decades in presenting the advance of American democracy during the late national period and early antebellum era – a span of years difficult to conceptualize but certainly marked by extraordinarily rapid socioeconomic and cultural transformations. Babylon’s Unbound examines the vexed transition from elite-dominated republicanism to the world of equality, rights consciousness, and popular politics. It offers a fresh perspective by unpacking these developments within the context of rising market capitalism, slavery, and abolitionism in the key slaveholding Border State city of St. Louis. In this regard, Babylon’s Unbound will make a major contribution to a new generation of history scholarship dedicated to illuminating the antebellum South’s long-unexamined “modern worlds.”

Babylon’s Unbound aims to enrich that body of history scholarship dealing with the interrelationship of gender, culture, and law in the antebellum South. It looks at the notorious unruly conduct of the Anglophone Americans who flooded the French Creole fur trading town of St. Louis after the United States acquisition of Louisiana in 1803. The work reveals how, after the War of 1812, a Whig-Republican officialdom in St. Louis led by mayors, aldermen, grand juries, prosecutors and judges sought to advance forms of public behavior that hewed to the preferences of the evangelical middle class and the gender prescriptions embedded in the “benevolent” reforms they advanced. Critical to this campaign was a rapid increase in criminal prosecutions to quell violent self-help and vigilantism; suppress the affair of honor and the duel; and rein in a burgeoning market in sinful products and services, especially public houses that offered liquor, gambling, and sex workers. Central to this discussion is the argument that such legislation and criminal adjudication constituted an effort to remake white masculinity among both ordinary men and conservative “gentlemen” with southern bearings – in accord with gender idealizations near and dear to the increasingly-influential evangelical middle class.

No less important, Babylon’s Unbound will explore the tensions that arose when equally determined Catholic French Creoles refused to abandon their traditional ceremonial culture and ordinary Anglophone women and men who embraced Jacksonian democracy chose to exercise volubly, and sometime violently, their own understandings of freedom, equality, and citizenship. Integral to this popular resistance movement were formal legal challenges to criminal prosecutions targeting gambling and the imbibing of alcoholic beverages in groceries, taverns, grog shops, and bawdy houses, the assessment of which will make a distinctive addition to antebellum southern legal history.

This book will show that Jacksonian democracy produced several important humanitarian reforms deemed especially beneficial to ordinary white men in St. Louis, such as a permanent ban on the lashing and pillorying of free men and the establishment of the first state penitentiary. More important, it demonstrates that the struggle between elitist republicanism and middle-class evangelicalism, on the one hand, and the forces of popular democracy, on the other, ultimately produced contentious appeals to the Missouri Supreme Court and ouster proceedings in the Missouri General Assembly that drove from the St. Louis Circuit Court bench the last Whig-Republican judge possessed of unstinting “benevolent” tendencies. This struggle also gave rise to a new judicial dispensation that tolerated increasing mob violence aimed at abolitionists, such as Elijah P. Lovejoy, and transgressive free African Americans – transformations that ultimately produced the urban foundations of an antebellum “white man’s democracy.”

Babylon’s Unbound will add to the contentious scholarship that explores the advance of American democracy during the late national period and early antebellum era in the key slaveholding Border State city of St. Louis. In so doing, the book will also contribute to a new generation of history scholarship dedicated to illuminating the antebellum South’s long-unexamined “modern worlds” – and enrich considerably that body of history scholarship dealing with the interrelationship of gender, race, culture, and law in the antebellum South.

Homesteads Ungovernable: Families, Sex, Race, and the Law in Frontier Texas, 1823–1860 (University of Texas Press, 2001). In this book, Professor Carroll draws on social, cultural, and legal history to trace the development of sexual, family, and racial-caste relations in the most turbulent polity on the southern frontier during the antebellum period. He finds that the marriages of settlers in Texas were typically born of economic and practical necessity and that, with marriageable white women often unavailable, Anglo men frequently partnered with Native American, Tejano, and black women. While identifying a trans-cultural array of gender roles that combined with the law and frontier disorder to destabilize the marriages of homesteaders, he also reveals how evolving Texas law reinforced the substantial autonomy of Anglo women and provided them material rewards, even as it ensured that cross-racial sexual relationships and their reproductive consequences comported with slavery and a regime that dispossessed and subordinated free blacks, Native Americans, and Tejanos.

“‘All for Keeping His Own Negro Wench’: Birch v. Benton (1858) and the Politics of Slander and Free Speech in Antebellum Missouri.” Law & History Review Vol. 29, no. 2 (Aug 2011): 835-897. The slander suit brought by outspoken pro-slavery Missouri Supreme Court Judge James H. Birch against Unionist Senator Thomas Hart Benton of Missouri for slander in 1849 implicates numerous issues of importance to constitutional scholars and historians interested in the legal and political culture of the United States before the Civil War. These include the centuries-old common law right to individual reputation, the rise of competitive two-party politics, and their conflicted implications for constitutionally-protected freedom of political expression in antebellum America. By the same token, close study of the legendary cause célèbre discloses what ordinary people, newspaper editors, and elected officials deemed to be the proper role for political invective and the appropriate limitations on defamation actions in a boisterous white man’s democracy deeply conflicted over the question of African-American bondage.