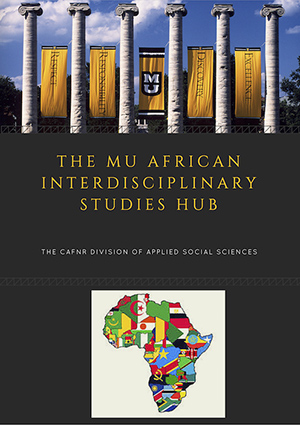 The MU African Interdisciplinary Studies Hub (MU AISH, or simply the Africa Hub) serves as a center to enrich the University of Missouri and surrounding communities with knowledge about Africa and knowledge created in Africa. It pledges to continuously play an essential role in accomplishing the university’s mission and commitment to robust public service by cultivating a space where scholars and students can deconstruct stereotypes about the continent, explore the vast terrain, examine diverse cultures and traditions, and illuminate pressing issues, thus shaping new frontiers of knowledge that encourage and promote understanding and study of Africa. Some of our most recent, exciting events include the Focus on Africa Blitz Presentations, the Interdisciplinary Zoonoses Research Symposium, and the Our African Origins Symposium, featuring Dr. Meave Leakey. Please follow us on Facebook and Twitter!

The Afro-Romance Institute facilitates collaboration between the Department of Romance Languages faculty and scholars outside our institution. It serves first and foremost to expose black writers, artists, and filmmakers of Spanish, French, Portuguese, and Italian expression to a wider audience. The Institute's primary focus is the literature, language, and film of selected areas of Africa, the Caribbean, Latin America and the United States, and the interrelations between these three poles of the African dispersion. It coordinates a number of both internal and external programs designed to bring the literature of black writers of French, Portuguese, and Spanish expression into the academic mainstream. A major event we help organize recently was the Afro-Cuban Artists: A Renaissance Conference, which explored various topics related to the aesthetics, socio-cultural and political antecedents, context and impact of the Afro-Cuban artists who came of age after 1959, such as Manuel Mendive, Santiago Rodriguez Olazábal, and Eduardo Roca Salazar.

Supported by a grant from the Kinder Foundation, a family philanthropic foundation started by Rich and Nancy Kinder, the Kinder Institute on Constitutional Democracy is an interdisciplinary academic center on the University of Missouri campus in Columbia designed to promote excellence in teaching and scholarship on the American constitutional and democratic traditions. Since programming commenced in 2014, the Institute’s goal has been to serve the following three constituent groups: undergraduate students, faculty and graduate students, and the greater community. Please refer to our website for additional details and a list of past and upcoming events. Follow us on Facebook and Twitter!