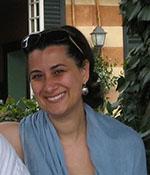 Ilyana Karthas joined the history faculty after teaching for three years at McGill University in both the History Department and Women’s Studies Program.  She teaches courses in Modern European intellectual and cultural history, specializing in 19th and 20th century France. Her research interests focus on the development of national identity, modern aesthetics, and ideologies of gender.  Professor Karthas also teaches courses as part of the Gender Concentration and she is an Affiliate Faculty member of both the Women’s and Gender Studies Department and the Kinder Institute.  In 2010-2011, she served as the first Scholar’s Chair offered by the Department of Women’s and Gender Studies in which she awarded a research stipend, delivered a public lecture, and taught a seminar in the WGST Department.  In 2013, she was awarded the Maxine Christopher Shutz Award for Distinguished Teaching & Lecture and, in 2020, she was awarded the Alumnae Anniversary Award for Excellence in Teaching. She has been invited to participate in public lectures at the National WWI Museum in Kansas City.

Professor Karthas completed her Ph.D. under the supervision of Dr. Carolyn J. Dean at Brown University where her research fields included French Cultural History, Modern European Intellectual & Cultural History, Women’s & Gender History, and Modern European Art History.  As a doctoral student, she received a number of fellowships including a Mary L. S. Downes Dissertation Fellowship, a Joukowsky Fellowship, and a Council for European Studies Florence Gould Foundation Fellowship from Columbia University. She received her M.A. in Women’s Studies from Oxford University.  Her M.A. thesis examined women’s involvement in early photojournalism in the 1930s.

Professor Karthas’ first book , "When Ballet Became French:  Modern Ballet and the Cultural Politics of France, 1909-1939” ( McGill-Queen’s University Press, 2015) is the first book-length study to address how and why the French re-embraced ballet as a symbol of French national renewal and cultural pre-eminence after the arrival and success of the Ballets Russes.  It traces the cultural labour involved in raising up an art form in decline and transforming it into a hallmark of the nation. In examining the cultural transfer of ‘modern’ ballet via the ‘Russian’ troupe, it pays particular attention to how the performing arts emerged as a central venue not only for the experimentation of artistic modernism, but also for the expression of cultural anxieties in late nineteenth- and early twentieth-century France.  The book places the cultural resurgence of ballet within three key themes of early twentieth-century European history: the development of nationalism, modern aesthetics, and changing configurations of gender.  Professor Karthas’ other research projects continue to explore the interaction among public intellectuals, the theatre-going public, and contemporary attitudes concerning nation, politics, and art.  Her article, “Gender and the Revival of Ballet in Early Twentieth-century France” was published in The Journal of Social History in the summer of 2012.  Her second book project, Authority of Mind: Women, Modernism, and the Making of Paris, will offer new insight into women’s complex role in the cultural process of modernity in France. It will present a new paradigm for understanding the arts worlds of Paris between 1870 and 1960 by revealing women as important and effective arbiters of taste in this period. The book project places women at the center of Paris’ artistic worlds of the early 20th century by revealing how women played a crucial role in fashioning Paris as a cosmopolitan center and a place at the forefront of modern aesthetics and innovation. Her article of the same name was published in the peer-reviewed journal French Cultural Studies in 2020.

HIST 1510: The History of Modern Europe

HIST 4971: History of the Modern City

HIST 4971: The Making of Modern France

HIST8004: The Politics of the Body in Historical Perspective

HIST 8004: Envisioning Modernity: French Culture and Politics of the Arts

HIST 8571: History of the Modern City in Europe