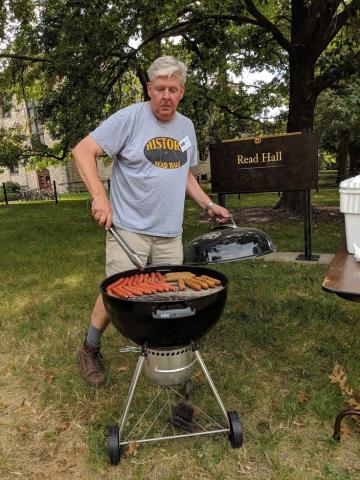 John Frymire received his Ph.D. in History in the Program of Late Medieval & Reformation Studies under the supervision of Heiko Oberman (2001). At Arizona he also studied medieval and early modern European history with Alan Bernstein, Donald Weinstein, Hermann Rebel, and Susan Karant-Nunn. Frymire also spent seven years as a student and researcher in Europe, primarily at the University of Tübingen, where he studied history, theology, and languages. For several years in Tübingen he was an Assistant to Peter Godman in the Division for Medieval and Renaissance Latin in the German Language and Literature Department. He has been a Fulbright Scholar, a fellow at the Institut für europäische Geschichte (Mainz), and lived and conducted research in Germany, Italy, and Austria.

Professor Frymire teaches courses in late medieval, renaissance, and reformation Europe (ca. 1350-1700) including an introductory survey of the era (Hist 1570), advanced courses on the Renaissance (Hist 4630/7630) and Reformation (Hist 4640/7640), and undergraduate and graduate seminars pertaining to specific issues in early modern European history.

Frymire’s research focuses on Germany and Italy during the eras of Reformation and Counter-Reformation. He is particularly interested in Martin Luther and the Catholic response to Protestantism as recorded in sermons and pastoral literature. Frymire has recently published a monograph, The Primacy of the Postils, a study of the standard Catholic, Lutheran, and Calvinist sermon collections used in Germany from 1520 to 1620. He is now completing Pestilence and Reformation, a book on preaching and disasters such as plague and famine in early modern Germany. This will be followed by Catholic Preaching and the German Reformation, a study that reconsiders the Catholic response to the Reformation in Germany on the basis of sermons that by-and-large have been neglected in the scholarship.