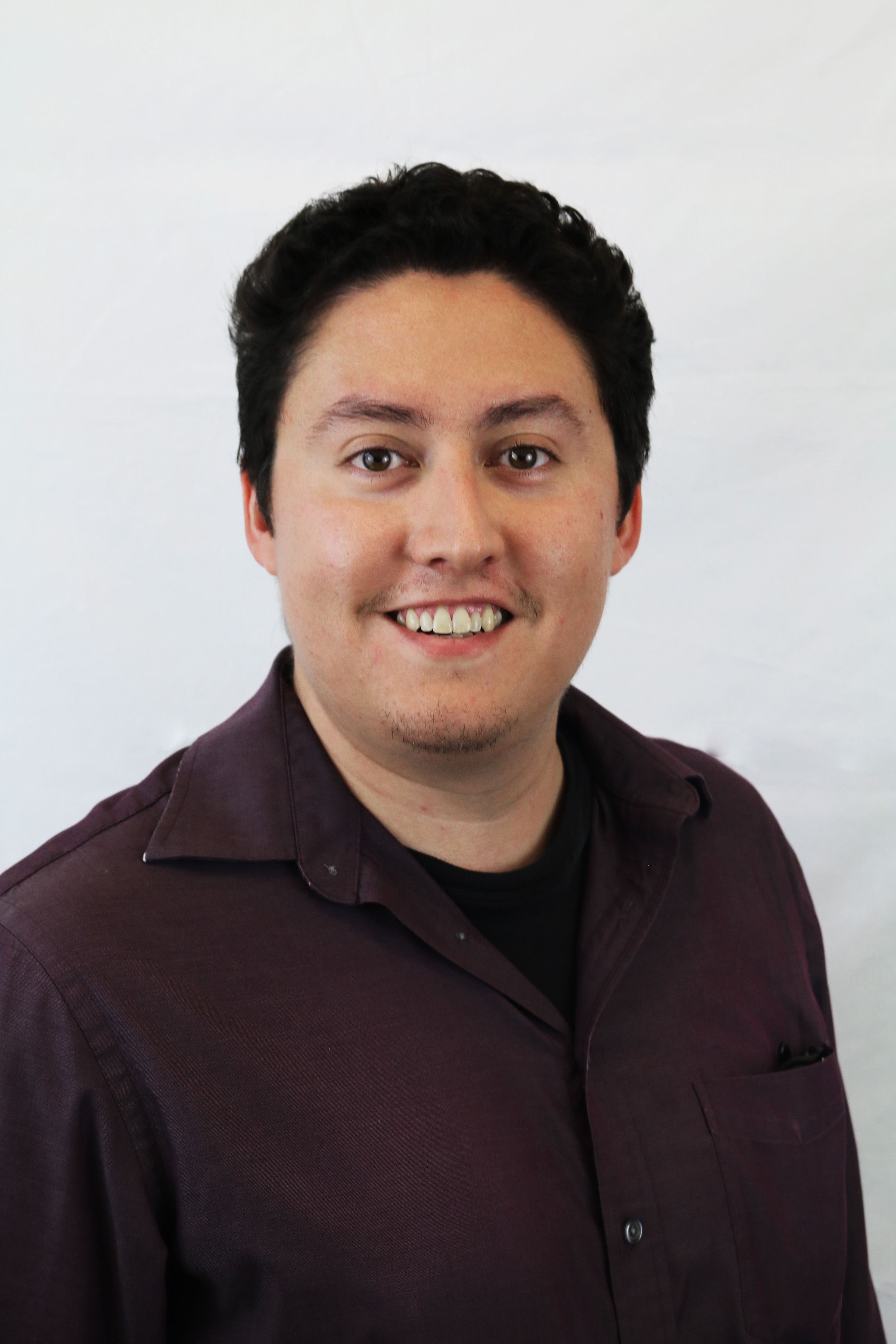 Marc Reyes, a University of Missouri history grad and current PhD candidate at the University of Connecticut, is working on a dissertation on the history of India’s atomic energy and nuclear weapons program. The scholar recently shared his thoughts about the Department of History, his education at Mizzou, how his degree led to success, his dissertation, and much more. He spent a year in India (2018-2019) with his wife, Libby, and returned to the area – Kansas City – for the birth of his son, Henry, born in 2020. He is also a Fulbright recipient and editor and co-founder of Contingent Magazine.

History Department: When did you graduate from MU and what degree did you acquire?

Reyes: I graduated in 2006 with a BA in History. I got my Master’s from the University of Missouri-Kansas City (UMKC) in 2014 and am finishing up my PhD at the University of Connecticut (he’s been in the program since 2014), also in History. So, I am a history major all the way from beginning to end.

History Department: You live in Kansas City, no? How are you finishing your PhD program long-distance?

Reyes: I lived in Connecticut for the first four years of my program, and then spent two years either in India or doing other international research. I teach online – whether it’s an asynchronous or synchronous course. I am teaching a synchronous class now. So, I’ve been teaching online since the fall of 2020. Last fall, I taught in a different department than history: I taught in a digital media and design department. It’s nice to be able to live back here, but still teach for UConn. They’ve been pretty flexible. 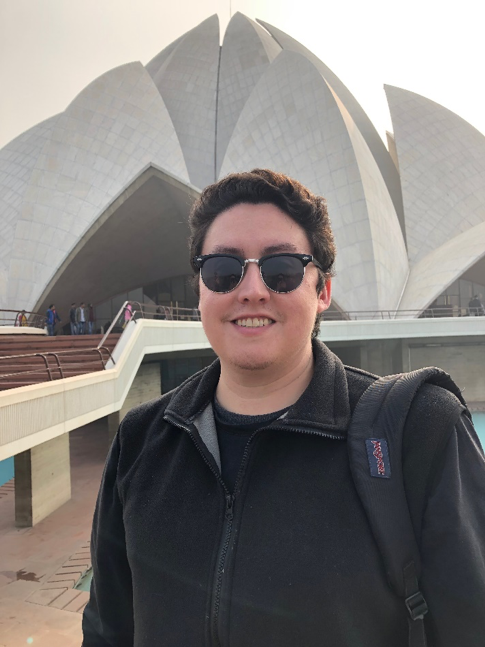 Marc Reyes at the Lotus Temple, a Baháʼí house of worship, located in New Delhi, India

History Department: What are your fondest memories of being a part of history at MU?

Reyes: I always enjoyed talks with my advisor Jenny Morton. We would always meet at the beginning of the semester and plan everything out. I really enjoyed that one-on-one personal advising. I came in with a lot of questions, was hopeful about the future, but also needed to make concrete plans. It was great talking with Jenny.

I also really enjoyed all the classes I took with John Frymire. I took probably every course I could with him, and one of my favorite memories was my research seminar with him. Every student built a project over the semester based on Renaissance or Reformation Europe, and that was the first research project I ever built. I did primary source research, but really got deep into secondary literature. So that seminar with him was really great!

I really enjoyed that one-on-one personal advising. I came in with a lot of questions, was hopeful about the future, but also needed to make concrete plans. It was great talking with Jenny. - Marc Reyes

The last year at Mizzou, I took a seminar with the recently departed Robert Collins. It was something like US Society & Culture in the Age of Reagan. And that class made me want to switch from Renaissance European history to modern U.S. I loved that seminar because it was a real deep dive into U.S. culture and society and intellectual history. My memories of Mizzou were of these great seminars that were really impressive, really helpful.

And there were other great instructors too. I always enjoyed every class I took at Mizzou, and I took a swath of different courses. 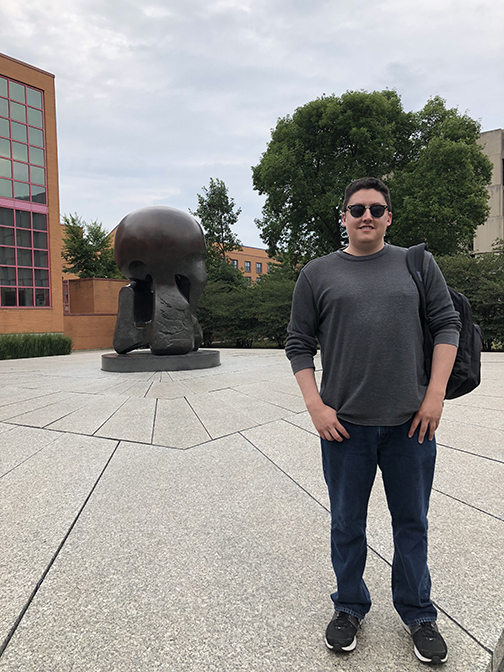 Marc in Chicago, at the site of the first self-sustaining controlled nuclear chain reaction. I was doing research nearby at the University of Chicago's Regenstein Library.

History Department: What were some of the most important concepts you learned while taking history classes?

Reyes: Probably the first one was that I learned that there’s the primary source – the source we’re looking at. But I learned of this larger field, historiography – what historians write about history.  This is largely about conjecture: what a new historian says based on new evidence, how historians talk, how they argue, how they have conversations with each other. It’s a long-running debate on what this or that means.

The first two years of history courses at Mizzou entailed learning what historians do. The second half was doing the work of history: writing, looking at primary sources and analyzing them, then interpreting them myself – you are actually doing the work of a historian. You learn what historians do and how they do it. Maybe at the time I wasn’t completely aware that’s what I was doing, but as someone who has been doing this teaching/research for a while, I try to instill some of that in the courses I teach. I have come to realize how much of that I actually learned at Mizzou.

History Department:  Would you recommend the MU Department of History to other students? Why or why not?

Reyes: I would definitely recommend the department. I would recommend it to people who are interested in history and want to major in it, and also to those who maybe need a GenEd requirement or didn’t have a great experience in high school. I would say Mizzou is different. I never had a bad encounter with the professors.

There was also a great variety of interesting courses, and the faculty was knowledgeable and approachable, but also really friendly. I remember John Frymire hosted us at a big cookout in his backyard. He grilled, introduced us to his family. It was one of those things where you know they do that in grad school, but we got to do it as undergrads. You just felt like you were part of the community of historians.

History Department: What have you done since your graduation? How did your education help with your successes?

Reyes: I’ve had two different careers. After I graduated, I worked as an auditor for a couple different Kansas City businesses. So, I didn’t immediately go to grad school. I wasn’t really sure when I was at Mizzou whether I wanted to teach or how I wanted to continue with history. But it certainly prepared me in meeting deadlines and being accountable for your work. I had to do a lot of different report writing and I had to give presentations. So, the skills I learned, not just through history but through different humanities courses, prepared me for the workforce in terms of communicating and writing, and certainly doing my part for the organization I worked for. 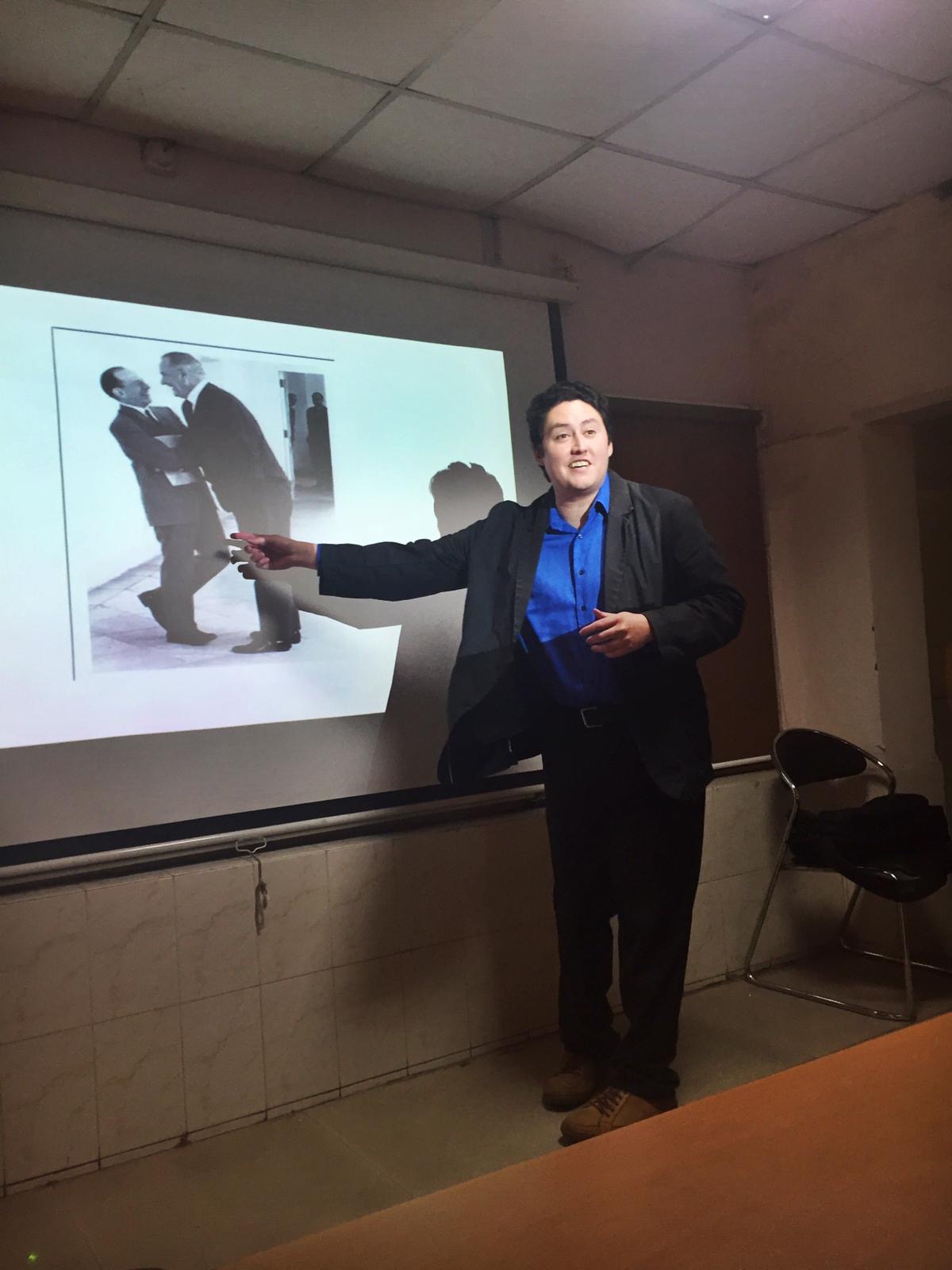 Marc delivering a lecture at Ambedkar University Delhi (located in New Delhi) about U.S. food aid to India during the 1960s

History Department: I understand your dissertation in your PhD program explores the history of India’s atomic energy and nuclear weapons program. Tell me about that.

Reyes: I’m writing about the political, cultural, and intellectual history of India’s atomic energy program. India started their own atomic energy program before they were even an independent nation. In the mid-1940s, they were thinking, after World War II, what their program would be like and how it would be set up. India wanted to pursue atomic energy in terms of generating electricity and power production for industrial development.

So, my dissertation traces the evolution of India – from wanting to have atomic energy for peaceful purposes to maybe something not so peaceful. Maybe something more military. - Mary Reyes

But by the 1960s, they started thinking about all the technology they had and their understanding of the atom, and thought maybe India could produce weapons if necessary. In 1962, India went to war with China and lost badly. They also had two wars with Pakistan from 1947 to 1965. These military struggles resulted in a growing drumbeat for some sort of atomic weapons program. More Indian policymakers began asking, ‘What if we used it not for defensive purposes, but for offensive purposes.’

So, my dissertation traces the evolution of India – from wanting to have atomic energy for peaceful purposes to maybe something not so peaceful. Maybe something more military.

India tested a nuclear device in 1974 and called it a peaceful nuclear explosion. It wasn’t until 1998, however, that they did another test and said this was a genuine bomb test. Right after India tested its bomb, Pakistan also tested a nuclear weapon. So that’s how South Asia became this persistent area of worries regarding nuclear proliferation. Since the 1998 test, India has very much wanted to be seen as a bomb power, and that is their way of saying, ‘we are this new modern nation on the world stage.’

History Department: You also won the Fulbright-Nehru Fellowship in 2018-2019. Tell me about that.

I did research at the National Archives of India and spent a lot of time at The Nehru Library. The library is home to the papers of India’s first prime minister, Jawaharlal Nehru. It’s also a library and museum of India’s first generation of leaders, as well as key figures involved in the Indian nationalist movement. That’s where I found a lot of interesting papers and oral histories, as well as literature on India from the 19th century to today. It’s a great library, but I also did research at the Institute for Defense Studies and Analysis and Indian Council for World Affairs.

Libby and I were based in New Delhi, but we saw a lot of the country. India is always going to be an important place for us. We have our Indian friends and family. We keep in touch with them, and we still reach out to them when we hear news of things going on in India. I look forward to taking our son there. 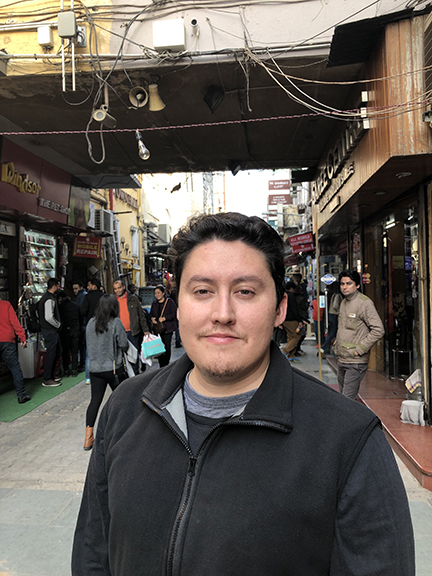 History Department: What advice do you have for other students who may be considering a history degree or who are already in our program as they advance to master’s or PhD degrees?

There are lots of rewarding pathways to meaningful work. Just be open to any type of future history position. Find something that’s interesting and meaningful and challenging to you.

History Department: So, what’s next for you? What do you have planned for after graduation?

Reyes: I’m going to finish my dissertation and find a full-time job. I haven’t applied for a permanent teaching position, though I have looked at some jobs. There is a postdoctoral fellowship I want to apply for this year. I’m really open to whatever the future holds, and if I can continue to work with students and to teach in some fashion, I think that’s all I’m looking for.

Also, there’s an article I’m trying to finish based on my master’s thesis about the politics of gratitude and U.S. food aid to India. And once I finish my dissertation, I’d love to turn that into a book. 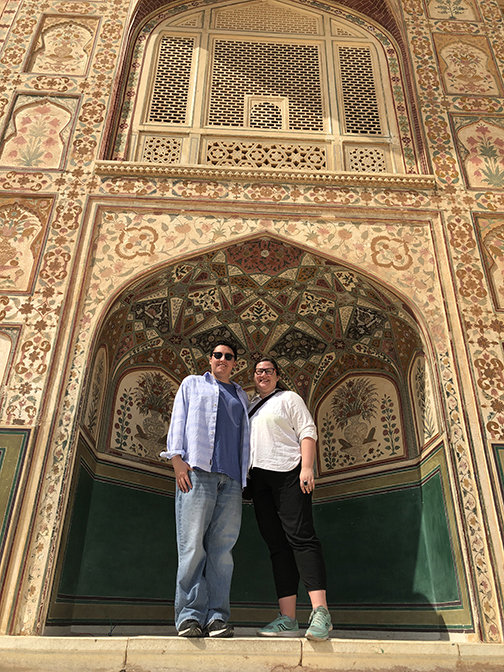 Reyes: I’m an editor and co-founder of Contingent Magazine. We are a history-focused news magazine that publishes new articles about every week. We operate as a nonprofit organization. We only publish people who are off the tenure track or nontenured scholars, so we publish a lot of librarians and archivists and graduate students, independent scholars, adjunct instructors. We’ve actually had people I know from Mizzou who published with us.

We are looking for all sorts of interesting articles, so if you want to pitch something, go to the How to Pitch Us page on our website. Right now, we are open for pitches. We pay $500 for features, $250 for field trips and reviews, $100 for mailbag. It’s enjoyable to work on such different articles, some of which I know a lot about, some of which I don’t. For instance, the last piece I edited was about female playwrights in the Progressive Era. I know very little about arts and culture in the Gilded Age, but it was a great piece, and I learned a lot about the topic from editing it.