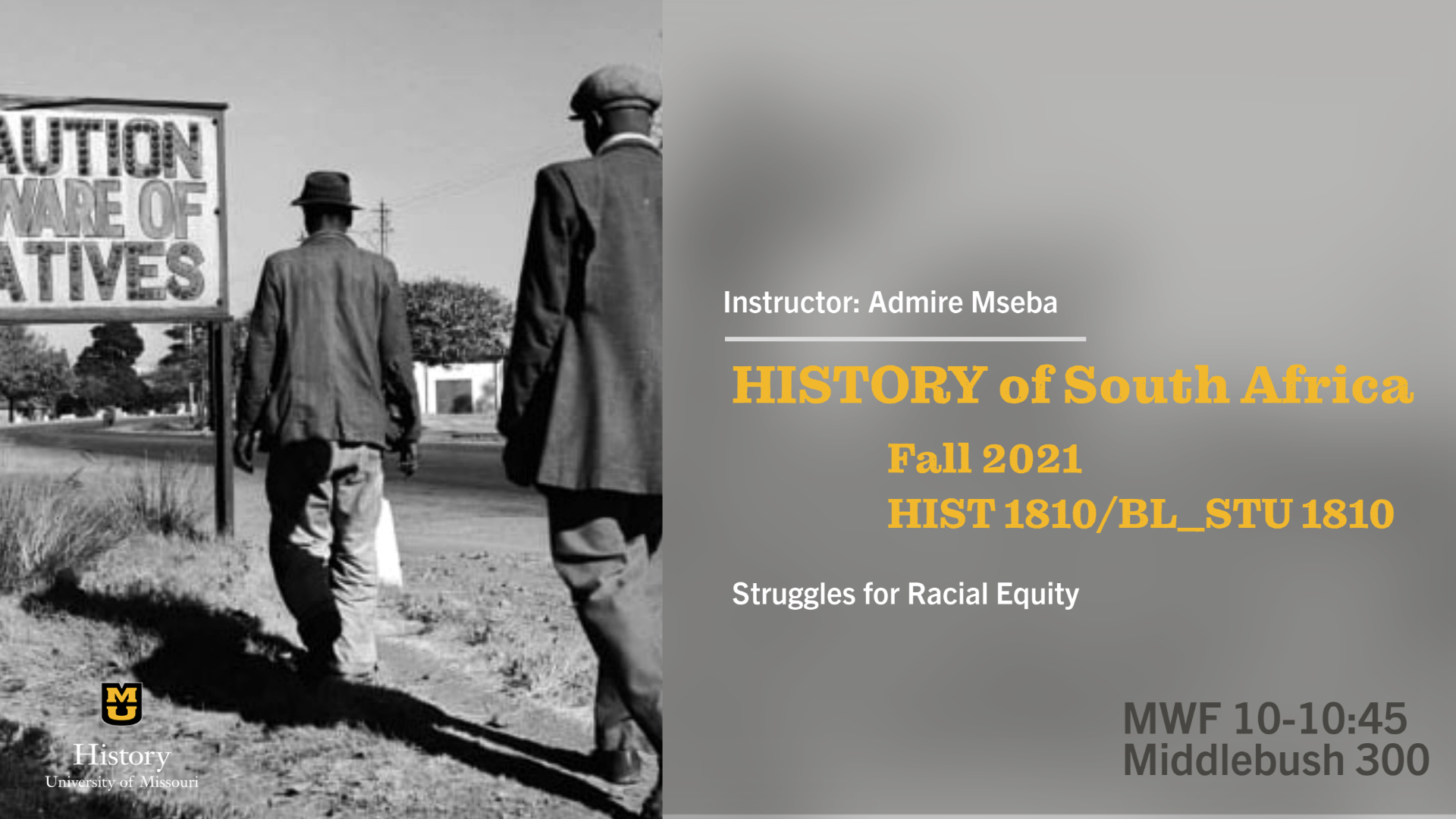 HISTORY 1810. HISTORY OF SOUTH AFRICA. (Same as Black Studies 1810). The course surveys the history of South Africa over the last four hundred years. Its primary thematic focus is the unique historical development of racism and class stratification in this part of the world. We will spend a great deal of our time discussing African lives under a system of racial inequality known as apartheid and Africans’ struggles to end it. We will end by discussing the legacies of colonialism and apartheid in South Africa and the lessons that they give to the rest of the world. Exams and papers: To be determined. Readings: To be announced. Professor: A. Mseba; 10:00-10:50 MWF 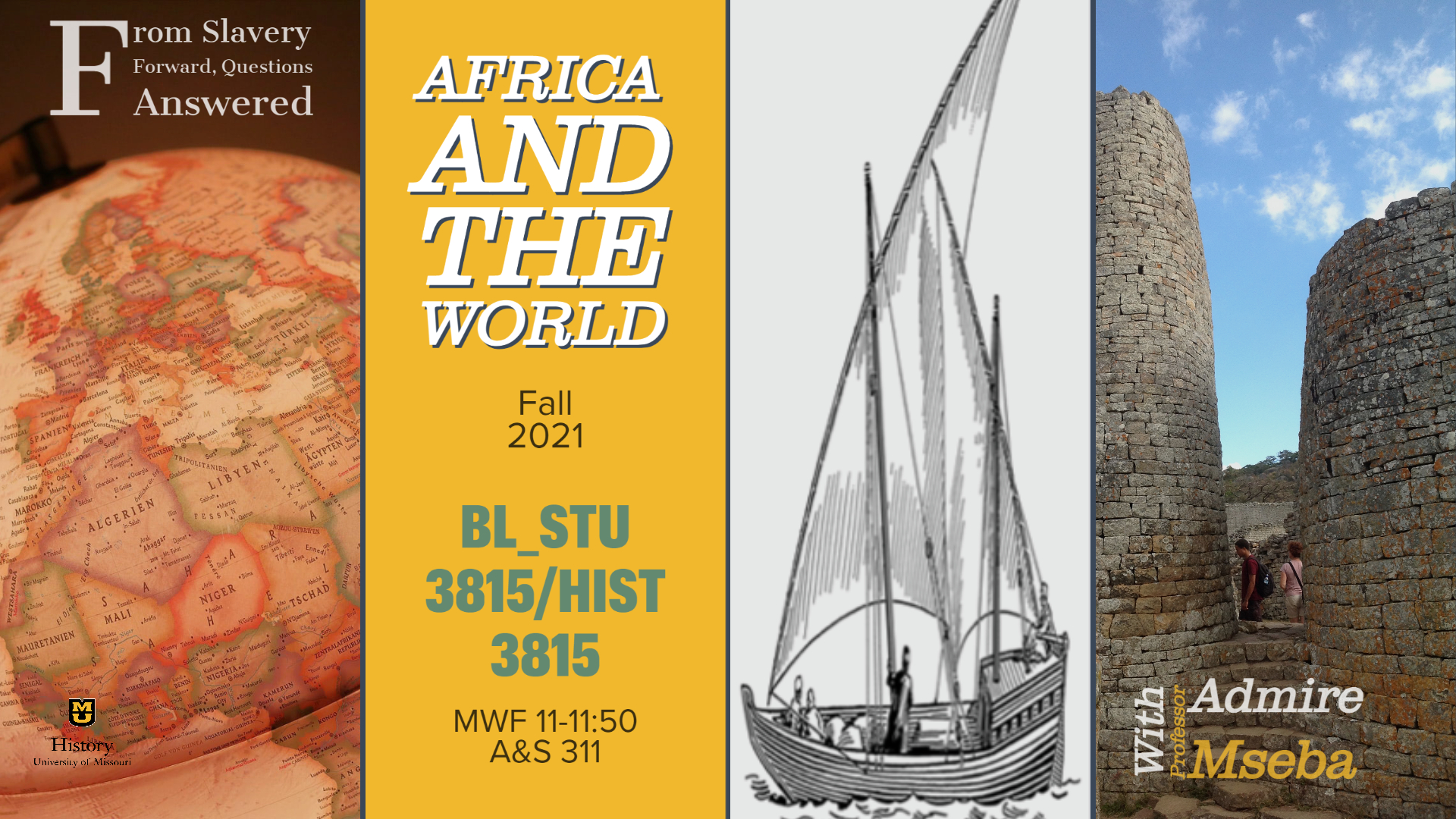 HISTORY 3815. AFRICA AND THE WORLD. (Same as Black Studies 3815). For millennia, Africans have interacted with people from other parts of the world. Africans from the south central and eastern parts of the continent have, for example, participated in the Indian Ocean global network for over a thousand years. Those from West Africa have participated in a vast commercial network through the Sahara. Since the sixteenth century millions of Africans were forcibly shipped across the Atlantic Ocean to toil in mines and plantations in the Americas. They carried with them knowledge, expertise and cultures fundamental to the making of this world. This course traces this history of Africa’s interactions with the wider world. It is organized around two broad themes: the impact of these interactions on African societies and the impact of Africans on the societies with which they interacted. Exams and papers: To be determined. Readings: To be announced. Professor: A. Mseba; 11:00-11:50 MWF 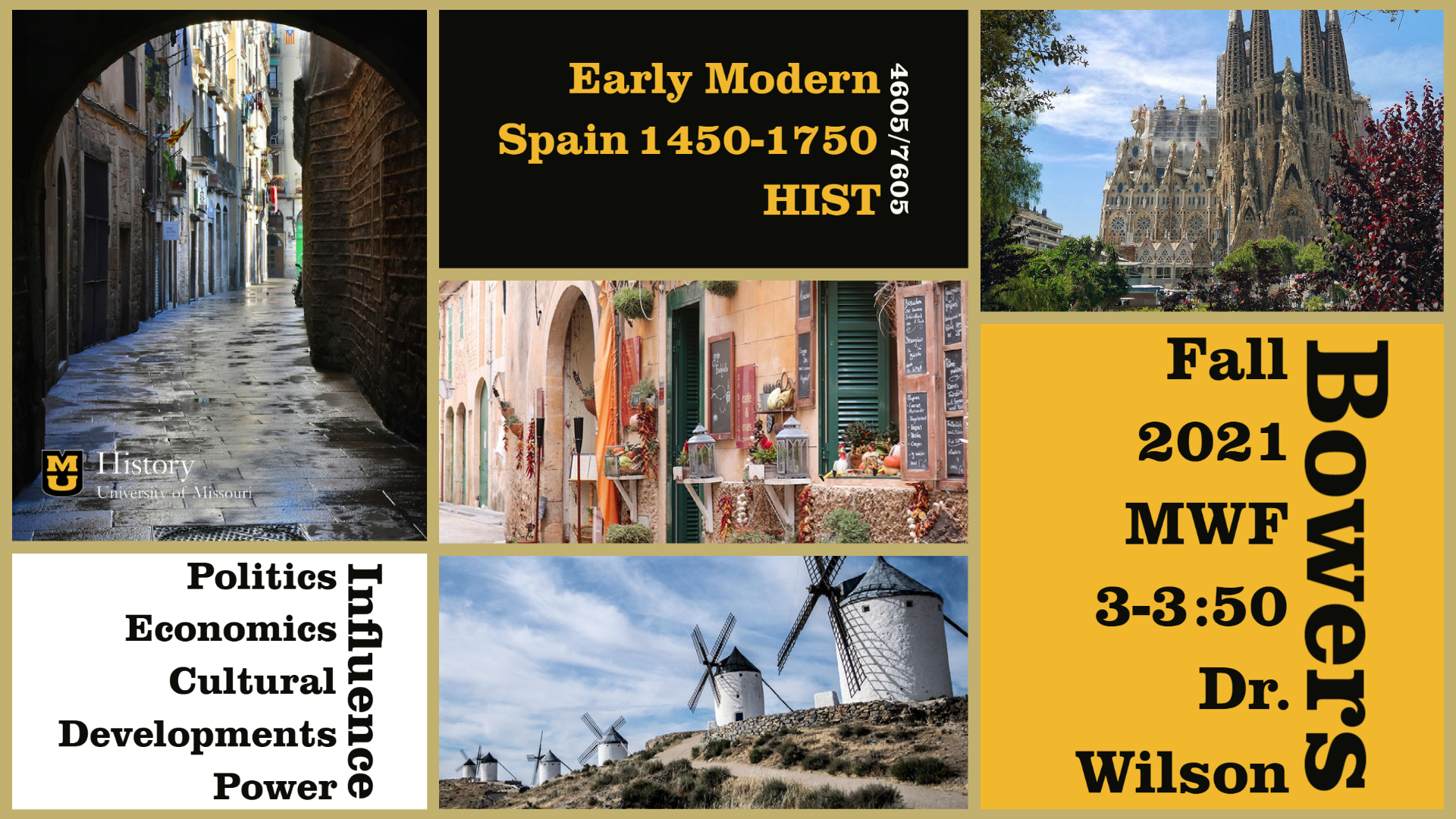 HISTORY 4605. EARLY MODERN SPAIN, 1450-1750. The early history of Spain is in many ways unique to the rest of Europe and is all too often overlooked in survey courses. Sitting at the crossroads of the Atlantic and the Mediterranean, Spanish interests in trade and exploration led to enormous global power and influence. In this course, we begin with Fernando and Isabel, whose marriage brought together the two principle territories of Castile and Aragon, leading to the beginnings of a “united” Spain. As we trace the political and social history of Spain through the early modern era, we’ll also be examining the many myths surrounding Spanish history including topics such as the Columbus’ voyages, the Spanish Inquisition and the Black Legend. Exams and Papers: Midterm and final exam, three short analytical papers, weekly short response writings. Readings: Henry Kamen, Spain 1469-1714; Jon Cowans, Early Modern Spain: A Documentary Reader; Sarah Tilghman Nalle, Mad for God: Bartolomé Sánchez, The Secret Messiah of Cardenete; Pablo E. Perez-Mallaina, Spain's Men of the Sea: Daily Life on the Indies Fleets in the Sixteenth Century. Professor: K. Bowers; 3:00-3:50 MWF