On June 1, 2020, the hashtag #BlackatMizzou started trending on Twitter. These tweets were written by Black students, both current and alums, and detailed the racist behaviors they faced on campus over the years. Not long after, students started adding the #StillConcerned hashtag to their tweets referring back to the demands and efforts by #CS1950, a group of Black MU students who organized in Fall of 2015 to protest the racial inequality and harassment Black students were enduring on campus. The recent efforts by students speaking out to draw attention to their experiences reminds me of the long history of civil rights activism at MU where activists worked off campus to ensure that local businesses were open to Black students and on campus where they fought to make campus spaces more representative.

I have studied the history of civil rights activism at MU for almost a decade, first while presenting on local history as an archivist at Western Historical Manuscript Collection and then focusing on the subject as a PhD candidate in MU’s history department. I was first drawn to student sit-ins because the efforts of CORE in 1958 featured sit-ins which predate the February 1960 student sit-in movement that started in Greensboro, NC and then swept through the South. My dissertation research compares the student activism at MU with University of Kansas students during the period between 1946 and 1954.

The history of civil rights activism on our campus goes back for many decades, but I want to highlight a few specific instances where students worked together to challenge racial inequality on campus. In 1958 several MU students living in the Men’s Residence Hall grew tired of the discrimination faced by the Black students living in the dorm from the Tiger Inn café which was located across the street (corner of 6th & Elm). They organized a protest outside the café that continued for several weeks. These men’s efforts eventually resulted in the manager changing his serving policies, but it also resulted in the organization of a CORE (Congress of Racial Equality) chapter on campus. The organization went on to stage sit-ins at many restaurants in downtown Columbia, protesting their refusal to serve Black customers.  They successfully integrated many businesses.

The Legion of Black Collegians, the first Black student government on a college campus, was organized in 1968 by a group of Black students at Mizzou. LBC presented a list of demands to university administrators that would change over time but always spoke to the need for more representation on campus—including more Black students, faculty, staff, curriculum, cheerleaders, and the establishment of a Black Culture House.

LBC and CORE members challenged many long-standing traditions on campus that had racist undertones like the playing of “Dixie” at football games. CORE leaders urged the band director to drop the song from the pep list for the 1960 Orange Bowl game against Georgia and argued that many in the state did not relate to the song’s ideas.

LBC also pushed the university administration and city officials to remove Confederate Rock from campus. The memorial was placed by the United Daughters of the Confederacy in 1935 and it was located prominently on campus at the corner of 9th and Conley. The rock was the object of repeated vandalism, and Gloria Steinem called for its removal when she visited campus in October 1971. Not long after Steinem’s visit, an October 12th Missourian article told of the decision by Missouri Students Association senate to ask the city to remove the rock because it was “offensive and insulting to Blacks and to all who sincerely desire an end to Black oppression.” Their efforts failed and in 1974 LBC was still waging the fight to have the rock removed. After meetings with university administration showed some progress, the rock was removed early in the morning on Friday, August 16, 1974. It was temporarily moved to the airport and then was located on the Boone County Courthouse lawn until a 2015 petition started by MU alum, Tommy Thomas III, resulted in its removal.

Many of the demands that CS1950 presented to university administrators in Fall 2015 were similar to those LBC circulated in the late 1960s. While there have been many successes in the history of civil rights activists on campus, there have also been setbacks, but Mizzou student activists continue to fight for change. 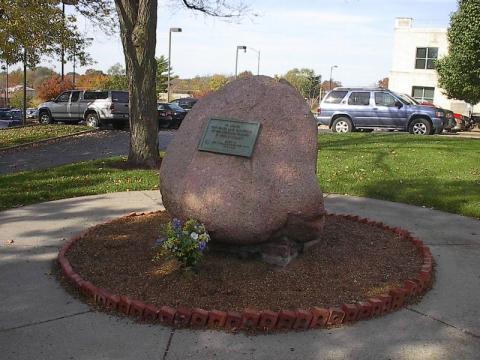